Upgrade your manual patrol bicycles to powerful pedaling-optional electric bikes by swapping-out your regular front wheel for a Patent Pending GeoOrbital wheel. The installation takes seconds and the wheel fits almost any bike.

Adding electric power to your patrol bikes greatly increases the efficiency of your public safety patrols.

Bicycles with electric power not only improve officer safety and increase range, but they also ease the ride on hilly terrain and in hot climates.

“You've got to smile while you are using it.... It takes a lot of the wear off your body, particularly on hills.” 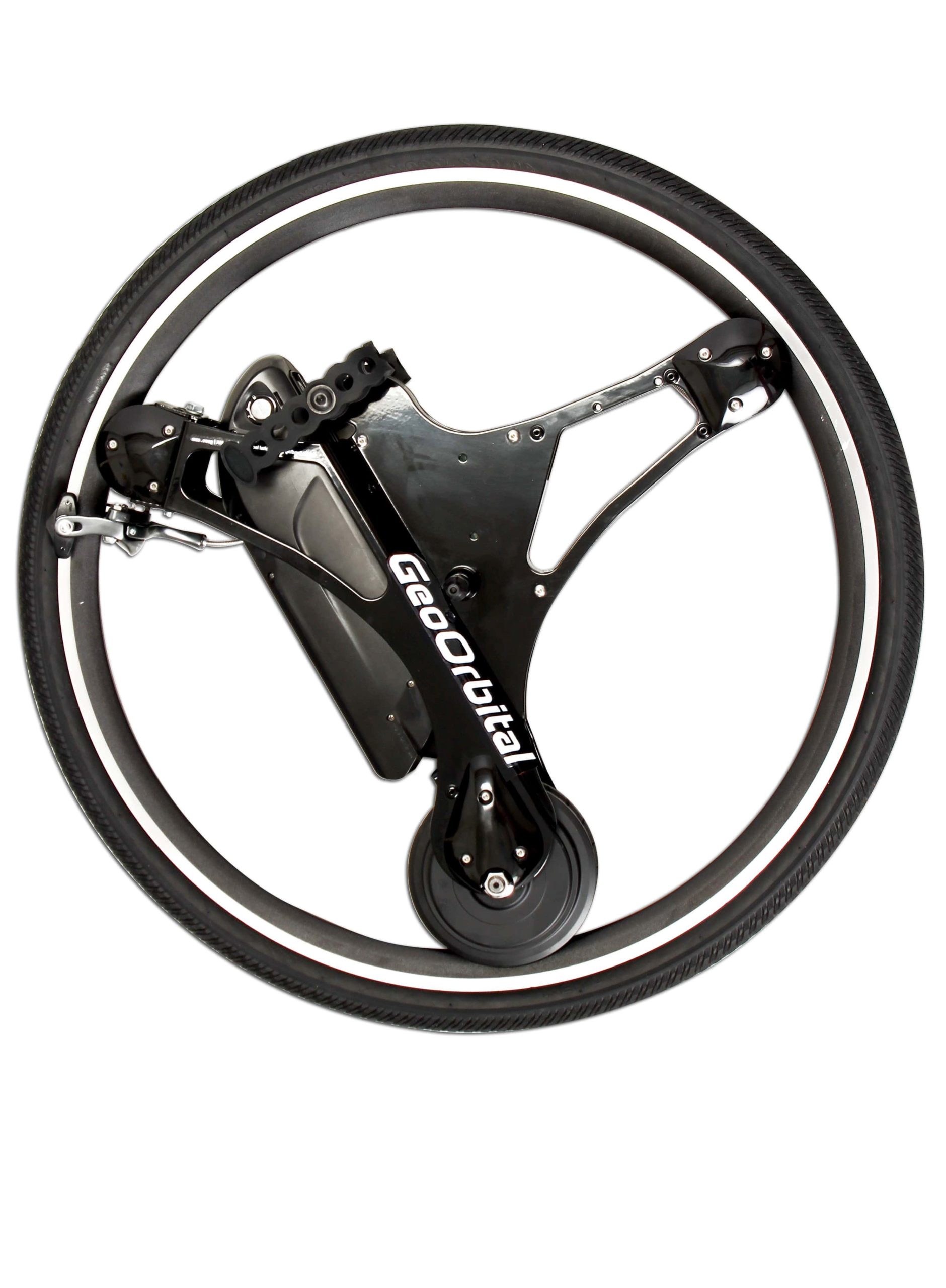 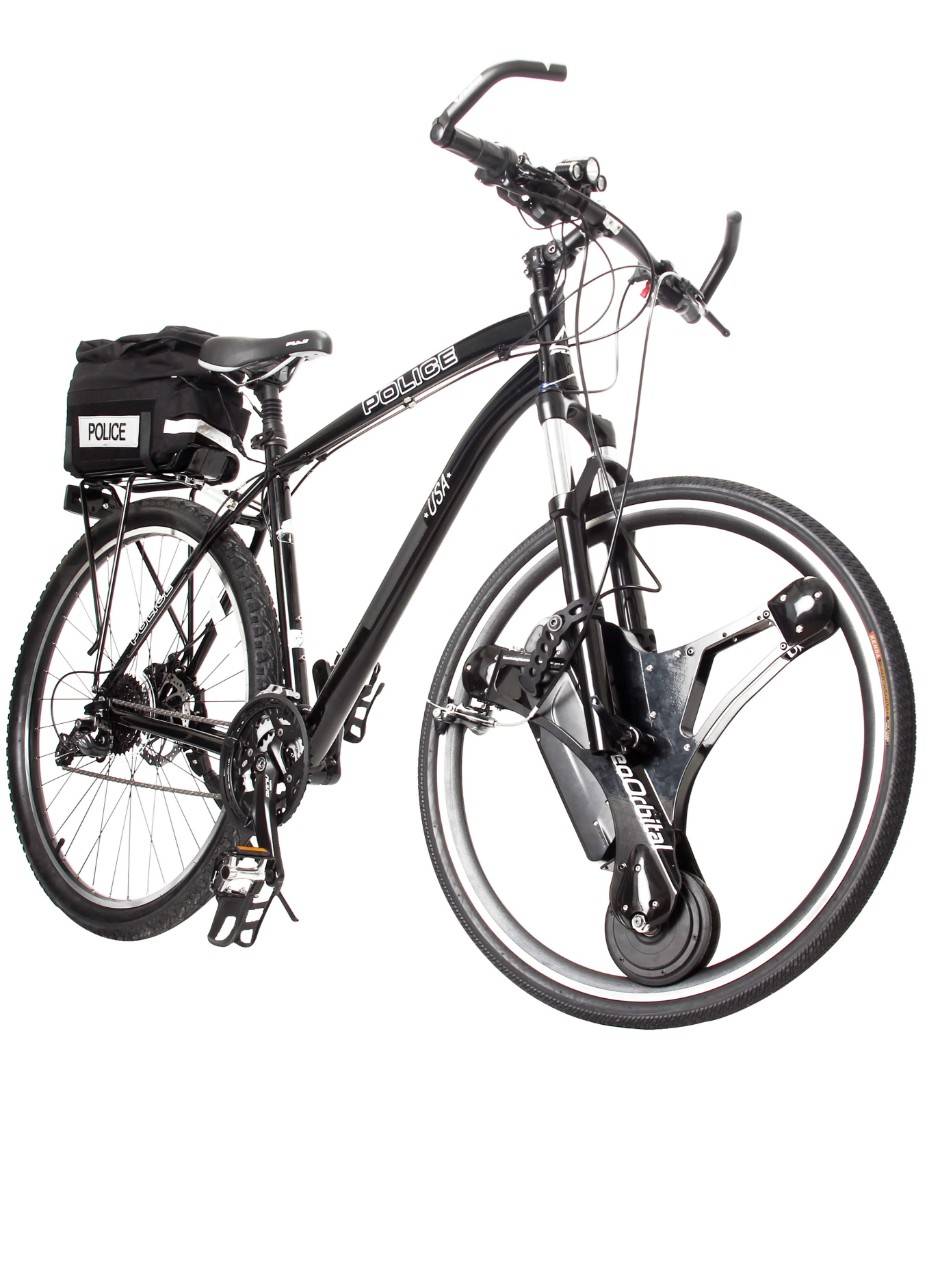 Adding power to patrol bikes improves officer safety by ensuring that officers arrive at a call fresh and not winded while providing a faster response time and expanding patrol zones.

Developed by engineers from SpaceX and Ford, the GeoOrbital wheel outputs 650W of power (750W peak) - that's TWICE the power of an Olympic cyclist. A simple throttle makes pedaling optional - the more you press the faster you go.

With data from over 300,000 miles ridden by thousands of consumers and active use by police departments in MA and NH, we are able to deliver a solution for the reliability and power needs of public safety officers.

This GeoOrbital wheel is built specifically for fleet use. It is the only solution that's easy to move from one bike to another (for reducing vehicle downtime and supporting future bike upgrades), supports swappable batteries for greater range, has a never-flat all-terrain tire and requires no maintenance. 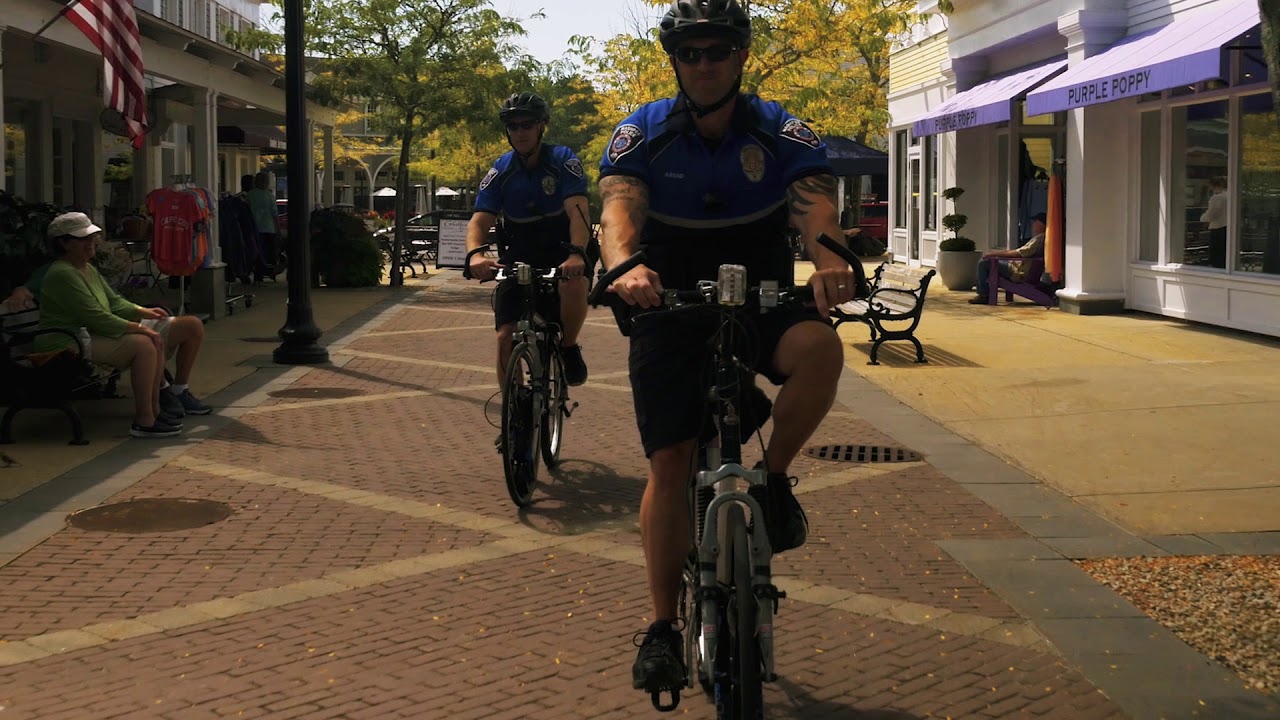 GEOORBITAL AND THE MASHPEE POLICE DEPARTMENT

The GeoOrbital wheel comes with a clip-on throttle which fits any bicycle handle bar without any tools or modifications. This is the most universal and easiest to install throttle solution in the industry. The throttle can be operated with the thumb or by attaching the included extender to be operated with the palm of your hand for longer rides.

The wheel can also be operated with the optional motorcycle-like "half-twist" throttle. The installation of this throttle requires the removal or the bicycle grips, but provides a much lower profile accelerator and a more familiar feel to motorcycle riders.

In another industry-first, the Public Safety GeoOrbital wheel comes self-contained with a Patent Pending mechanical brake and built-in Regenerative Braking for optimal stopping power and less stress on brake components. This in-wheel mechanical braking is only possible with the GeoOrbital wheel design. A powerful mechanical brake included in each wheel allows the wheel to be universally combatable with patrol bikes of all styles and configurations. Even if the department fleet is made-up of a variety of different bikes (sized 29in, 27.5in or 26in with disc or rim brakes), the same wheel will fit on all the bikes. When your bikes reach end-of-life, simply take the wheel and mount it on your new bikes, no matter which new bikes you choose.

Each battery provides up to 25 miles of no-pedaling range. When pedaling, the range per battery can reach up to 50 miles. These ranges are standard for most modern high-quality electric bicycles. The GeoOrbital wheel, however, takes it to the next level by providing the ability to carry multiple battery packs for extended range. For example, if an additional battery pack is mounted on the bike frame and another is carried in the equipment bag, the no-pedaling range can increase up to 75 miles and the pedal-assist range can increase up to 150 miles.

Every battery pack comes with a built-in USB outlet allowing for charging of phones, tablets, lights and many other forms of specialized equipment. It's a powerful mobile power bank that's always available.

The the air inside of a standard off-road bicycle tire is displaced with a specially developed high-density foam. The result is a tire that acts just like a traditional all-terrain bike tire, but will never get a flat, need tire pressure checks or maintenance. This is a proprietary technology developed by GeoOrbital and tested over hundreds of thousands of miles of real-world use.

By adding an additional powertrain to the front of the bicycle and retaining the ability to pedal, the bike becomes All-Wheel-Drive. Like in an automobile, the stability improvement becomes very noticeable especially in reduced traction environments including wet and gravel surfaces. Our All-Wheel-Drive technology provides a far better and stable riding experience than current Rear-Wheel-Drive powertrains.

With a top no-pedaling speed of 20 miles per hour, personnel can respond to a "hot call" faster than on a manual bicycle and they won't even break a sweat when they arrive. The bicycle's speed and range allow personnel to respond faster and with a greater range. Personnel safety is greatly increased by not having to exert themselves during a call for service.

With the GeoOrbital wheel the motor is mounted close to the ground resulting in an extremely stable platform, even at very slow speeds. Stability at slow speeds (like the speed of walking) is ideal when on patrol around people and events. The Pedaling-Optional feature of the wheel also allows personnel to ride their bikes in a standing position providing for superior line-of-sight above a crowd.

"It feels great, way less exertion, you don't have to pedal as much and I'm very impressed with how fast the wheel gets you going... I think it's great for our type of work."

Designed and built in Massachusetts

MADE in THE USA

FROM U.S. AND GLOBAL PARTS

Designed and built in Massachusetts

IPIMBA had this to say about GeoOrbital in a recent review:

Converting"Police Department patrol bikes from regular wheels to GeoOrbital electric wheels was seamless and a positive experience. The GeoOrbital wheels have renewed our officers' enthusiasm for bike patrolling, improved community relations, and enhanced officer visibility and safety. The GeoOrbital Wheel offered a way for our department to "go electric" while minimizing current and future costs and contributing to a safer environment."

GeoOrbital is proud to partner with the National Police Defense Foundation (NPDF) to promote the SafeCop™ program.

Assaults and threats against police officers are occurring at an unprecedented rate. The National Police Defense Foundation’s SafeCop™ program issues a $10,000 reward for information leading to the arrest and conviction of criminals who shoot at police officers or threaten their lives on the internet. Through GeoOrbital’s partnership with the NPDF, a portion of every electric bike wheel sale will be dedicated to the SafeCop™ program to help keep our officers safe.

GeoOrbital and NPDF are ready to ride!

"GeoOrbital has created an electric wheel with officer safety in mind. Bike Patrol Officers can now arrive at a call for service fresh and not winded while providing faster response times. The N.P.D.F. endorses this safe, new innovative technology."

GeoOrbital is proud to partner with Law Enforcement Against Drugs (L.E.A.D.), a nation-wide non profit (501c3) organization, supported by dedicated police officers, committed to protecting our youth and communities from the proliferation of drugs, drug related crimes, peer to peer/cyber bullying and violence. L.E.A.D collaborates with hundreds of educators, community leaders, families and L.E.A.D. support organizations.

Our partnership with L.E.A.D. further supports GeoOrbital’s mission of promoting community policing and officer safety through the use of our electric bike wheel technology.

"L.E.A.D. supports GeoOrbital's vision of promoting community policing with officer safety in mind, by working together with GeoOrbital we can create safer, healthier, communities free of drugs, bullying, and violence." 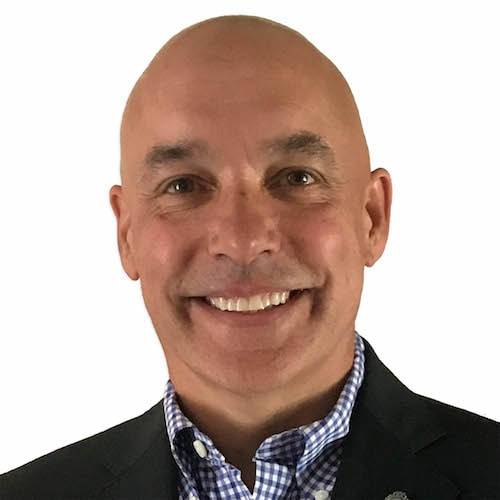 Director of the Public Safety Division 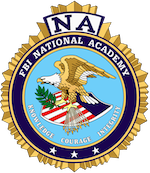 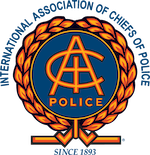 Jeff is the Director of GeoOrbital's Public Safety Division. He joined GeoOrbital after having served as a senior-level law enforcement executive with 14 years as Police Chief and Emergency Manager in the State of New Hampshire & Commonwealth of Massachusetts. He has thousands of hours of specialized training over the course of his 29 years of working in several capacities such as patrolman, narcotics detective, fire inspector, past vice president of Cape Cod Chiefs and control chief of a regional SWAT team and motorcycle unit.

Jeff has supervised large-scale events such as the Pan-Mass Challenge, Wounded Warrior Project Soldier Ride, Laconia Motorcycle Week, the Carnival Parade, United States Presidential visits as well as executive protection for politicians and celebrity talent. The last few years, he has worked in the private sector serving as a Security Global Account Manager for a pharmaceutical company. Jeff is a current retired member of the International Chiefs of Police, FBINA, MA & NH Police Chief Association and is a graduate of the FBI National Academy, Quantico, Virginia.

Currently the GeoOrbital Public Safety Fleet Wheel is available only to select organizations. For a quotation or to contact our Public Safety Division please complete this form or email us at safety@geoo.com.

Contact us for information about GeoOrbital or about purchasing a GeoOrbital wheel.